Each year a few people die during RAGBRAI. Accidents claim some cyclists, as do heatstroke and heart attack. While the EMT's make every effort, for some riders, time has come.

Death can't be totally unexpected when you have 10,000 cyclists, many of whom are amateurs performing high levels of aerobic exercise in the July heat. Some cyclists probably hope when their time comes that it's during RAGBRAI, amongst their fellow cyclists, surrounded by spokes and water bottles. That's the way they'd have wanted it.

Should you feel this way, there are some things you can do to make it easier for the survivors. First of all, let riders around you know that your death is imminent. Say something like "I'd die for another one of those pork chops," or the ever-popular "This bikeseat is killing me."

Nearby riders benefit immensely if you will "Ride Right!" before taking the BIG pull to the right. "Getting off -- for good" or "Pulling out, BIG-TIME" are suitable expressions to let those around you know your time has come.

Merely pounding your chest and turning blue can be misinterpreted if you are not surrounded by EMT's. On some teams, this signal merely means "Need another beer!" or "Bong is clogged up!"

Riding in RAGBRAI is a lot like heaven. There aren't any cars on the road, there's cold drinks and good food, everywhere you go friendly Iowa folks welcome you into their small towns, even into their homes. Is it any wonder some RAGBRAIers don't ever want to leave? 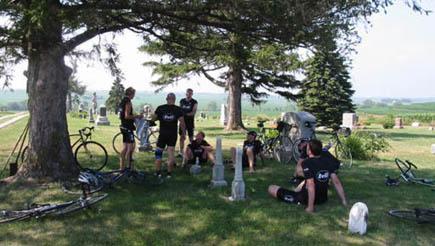 If you're having trouble dying, consider taking in a church buffet. The amount of cholesterol in the meals and pies served at these is enough to put most of us "Over the top." If you want lower levels, I suggest Lipitor™, not RAGBRAI™.

Some cyclists appear to have terminal tendencies even before they get to RAGBRAI. These are the ones who show up with one speed bikes. Unicycles. Knobby tires.

Cyclists who attempt to cross this state with fully-stocked bars and barbeque grilles attached to their bike racks may in fact be preparing their last supper without even knowing it. Of course, attempting to cross Iowa in the third week of July, usually the hottest week of the year, is itself an admission of self-destructive tendencies.

If one has faith in God above, then there can be no sadness in the passing of a fellow cyclist, for in heaven there are only cool and refreshing tailwinds, downhills, and a bearded man adorned in a glistening white apron who awaits cyclists with nothing less than the promise of his everlasting love, a fresh paper towel, and a delicious PORK CHOPPPP! 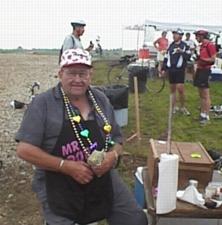